“I took a piece of film upon which I had photographed the word “hello” and installed this in the camera and passed it by the slit as near the same speed as we had taken it and by means of the Thalofide Cell on the other side of the slit and and incandescent light held so that it would shine through the film through the slit and onto the Thalofide Cell heard the word “hello” reproduced.”

-Ted Case in his notebook, December 1922

Explore the development of the technology which would transform the film industry forever. 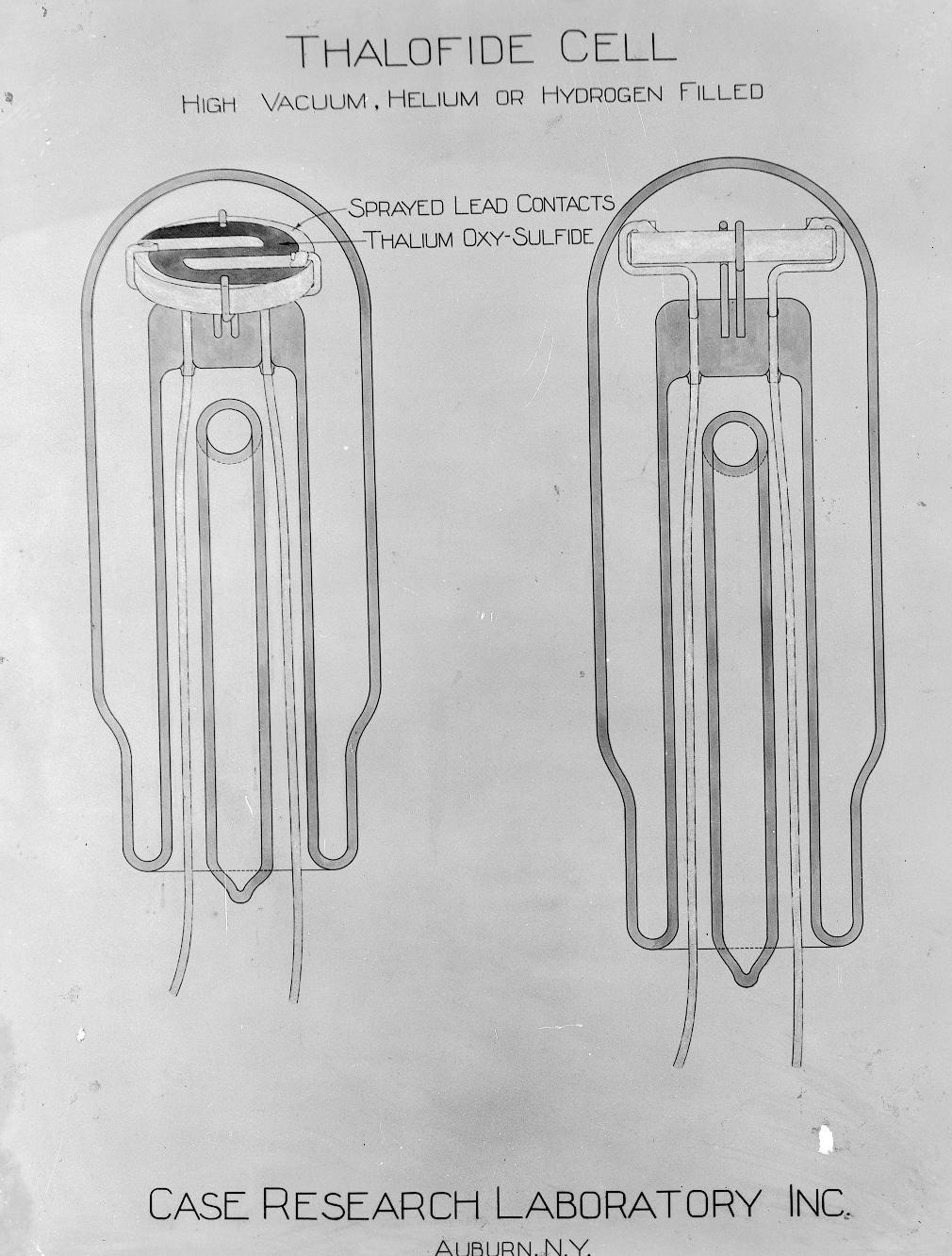 The period from 1920-1929 saw the Case Research Lab develop from no relevance to the entertainment industry to the unspoken center of the “Talkie” boom of the Roaring 20’s. As we journey through the technological advancement of the Lab during this time period, we will begin to touch on Case’s relationship with Lee de Forest, and will explore the fights over payment and credit that defined this relationship from its inception in later programs this year. We will also take a brief look at the ways Case’s creation became the Movietone system under Fox, but will likewise explore the non-technological elements of these stories in more detail later on. For now, let us begin where we left off with a humble, light bulb-like device: the Thalofide Cell.

As we touched upon in the previous program, the Thalofide Cell was quite possibly one of the most important innovations to come out of the Case Research Lab. 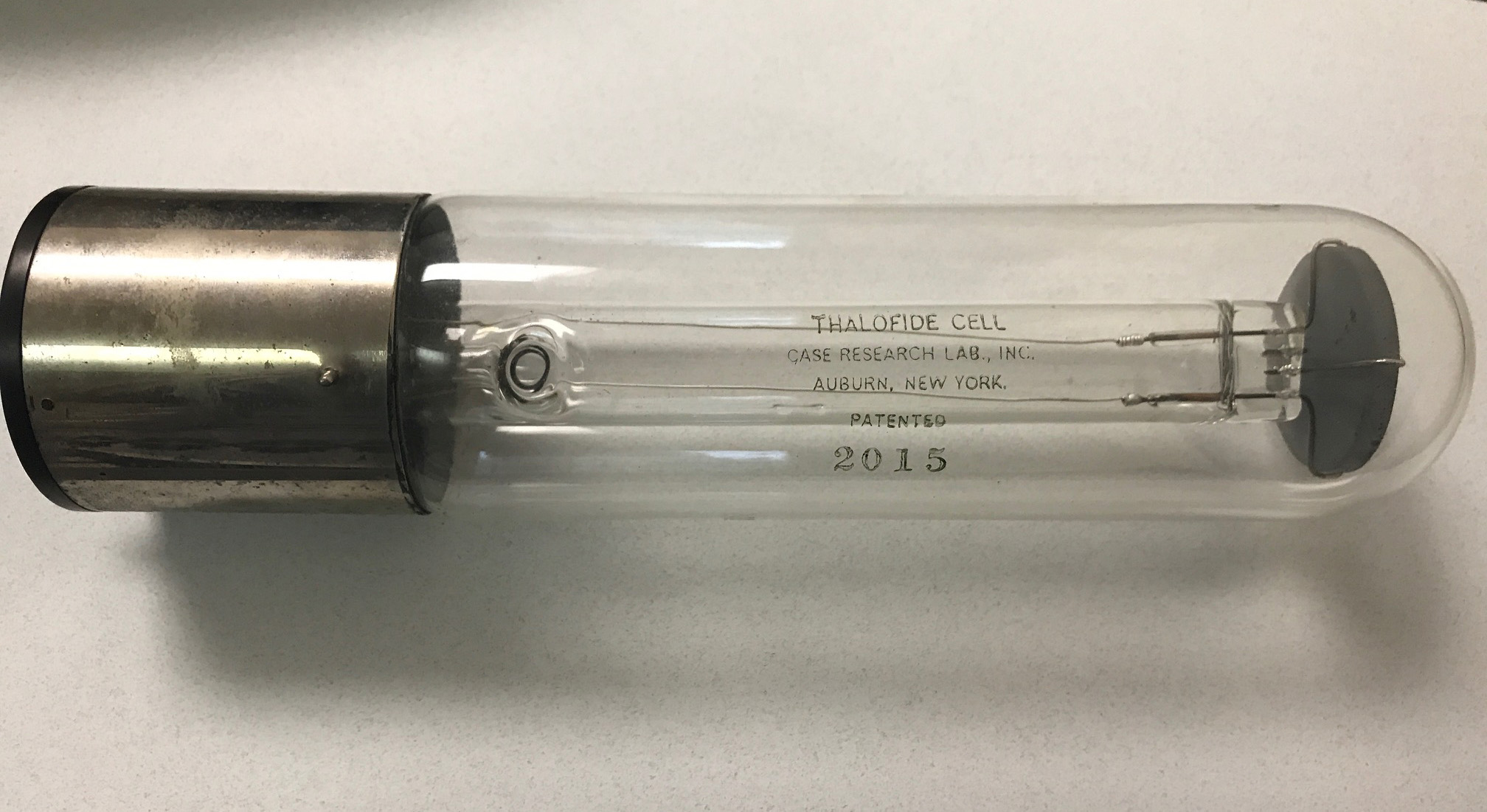 Its original use as a means for detecting infrared light would prove to be less influential than Lee de Forest’s discovery that the Thalofide Cells were superior to the Kuntz photoelectric cells which he had been using in his nascent Phonofilm sound film system. De Forest first reached out to Case about whether he had considered using the Thalofide Cell to make sound film in 1920. De Forest was most interested in whether the Case Research Laboratory would be able to make special orders of Thalofide Cells for his use, and after a series of discussion a working relationship would form between the two. 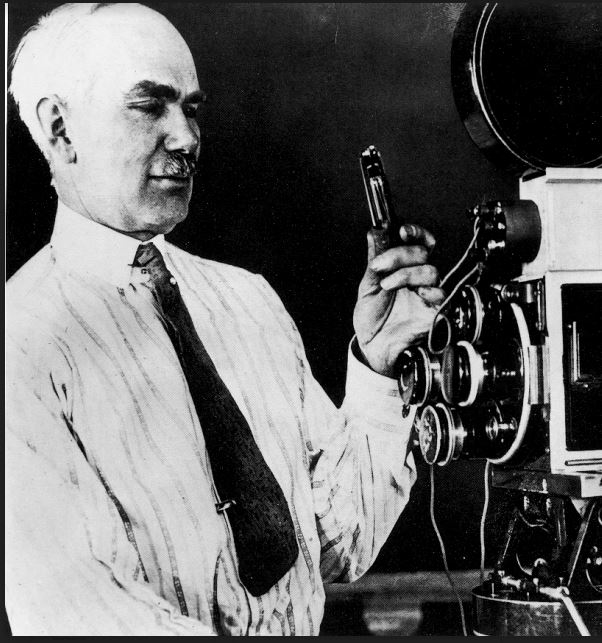 This time period became indicative of the ways in which Case and de Forest’s relationship would eventually decay, however. De Forest’s company lagged on payments due for their use of the Thalofide Cells, and based on a series of news clippings Case kept in his records, Case realized that de Forest had been using the Thalofide Cells for the creation of publicly acclaimed sound film demonstrations with no word of the technology which had so vastly improved the quality of his recordings. By the early 20’s, the Case Research Lab would shift to devote its resources towards the improvement of the Thalofide Cell for the purpose of fulfilling de Forest’s then seemingly impossible dream: to give film its voice.

The Case Lab’s methodical approach devoted to the quality of the product often pushed against de Forest’s insistence on speed and quantity for his ability to continuously build press and public support for sound film. At the time, the film industry had no interest in “Talkies” seeing the available technology as cumbersome, overly expensive, and a passing fad compared to the dominant silent movies of the 1920s. The early products of Phonofilm in particular faced mixed reviews, with the sensation of sound film shorts not enough to balance out the poor quality of the product. Of particular concern was the excessive scratch and background noise heard in these early films. By 1922, Case was constantly tweaking various elements of the system, sometimes at de Forest’s suggestion and other times following his own scientific instincts. In December of 1922, Case found the answer to the background noise issue and, without knowing it, the key to changing the face of international entertainment and media: the AEO light.

We will of course explore the buildup and activities on December 14, 1922 in more detail as we near the anniversary, but the main takeaway for the AEO light was its ability to more effectively coordinate with electrical pulses. Case describes the process in his notebook:

“I had this bulb hooked up directly with the output of a four stage amplifying system; one terminal going to the heated filament and the other terminal to the grid. The microphone for taking up the voice variations was connected up to the input of the first bulb of the amplifying system through a transformer…the new light was heated and the results were most pronounced and pleasing. The voice variation after being transformed into the electrical variations produced a beautiful glow discharge in the argon bulb.“ 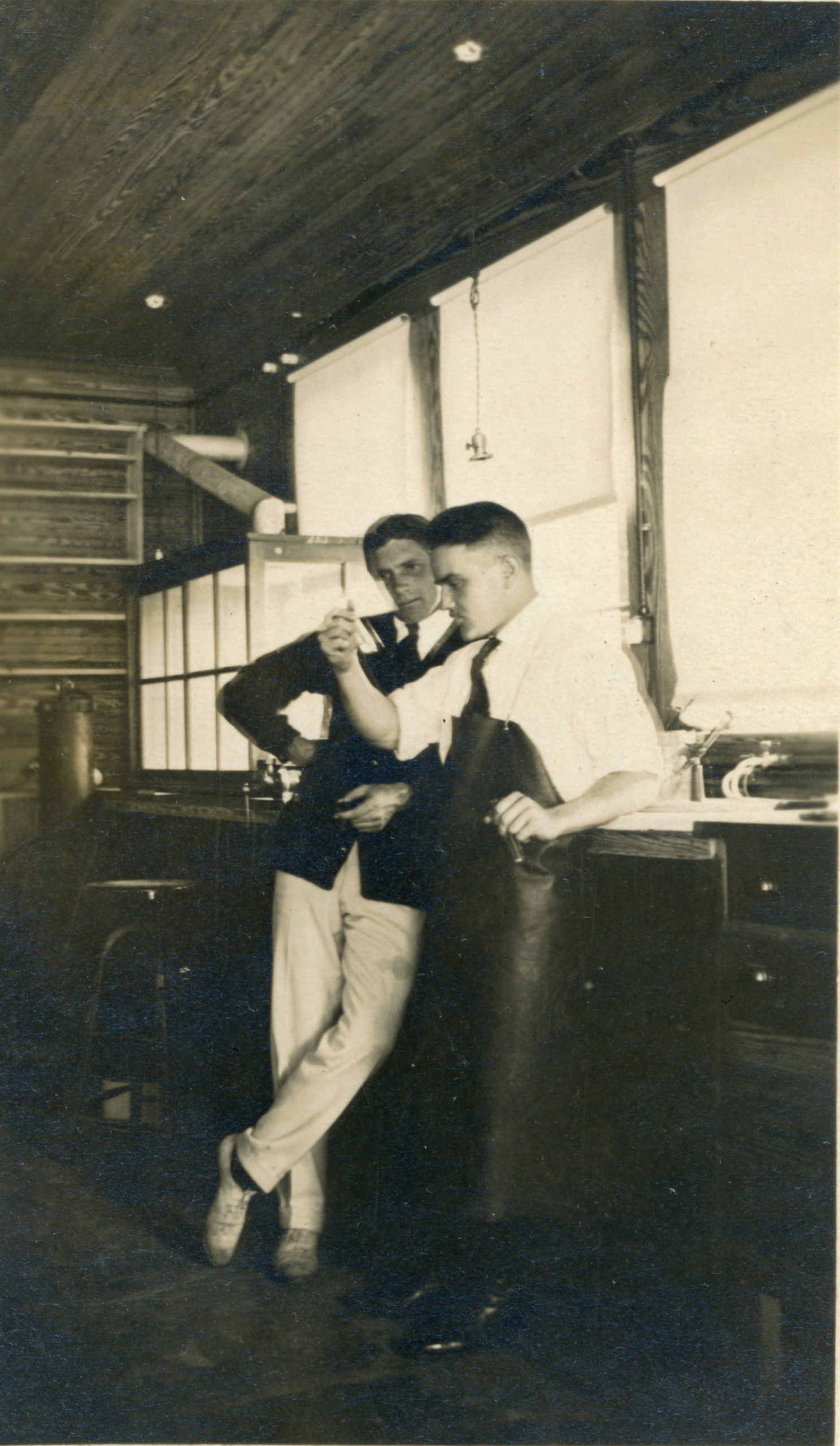 The technology produced no scratch, no background noise, and Case in a show of astute predictive powers contacted his lawyers first with his discovery before alerting de Forest, recognizing that the man would likely attempt to claim the credit for the device. The stage was officially set for the continued strained relationship between the two, but as the years progressed and Case was both one of De Forest Phonofilm’s most important financial assets (himself providing the funds to rent out theaters for sound film demonstrations) as well as the provider for unparalleled sound recording equipment, the the need for de Forest became less and less apparent.

Are you an early film hobbyist and would like to learn how to replicate using an AEO light yourself? Check out these YouTube tutorials that will walk you through open source software developed by the Moving Image Research Collections at the University of South Carolina!

Learn More About the AEO Light

A continually strained relationship, with de Forest continuing to provide Case with minimal due credit for his technological contributions as well as late payments for the technology, came to a head in 1924 when Phonofilm arranged to record the sitting President at the time: Calvin “Silent Cal” Coolidge, one of history’s great ironies that the first sound film recorded President was famously tight lipped. In the buildup to the moment, Case and Sponable had secretly devoted the Lab’s resources to creating a retrofitted Bell and Howell Camera with an AEO light: a superior recording camera to the technology then used by De Forest Phonofilm. On July 25, bringing the modified camera with them to Washington D.C., Case Lab and Phonofilm workers met to record the President and progressive firebrand Bob LaFollette of Wisconsin. 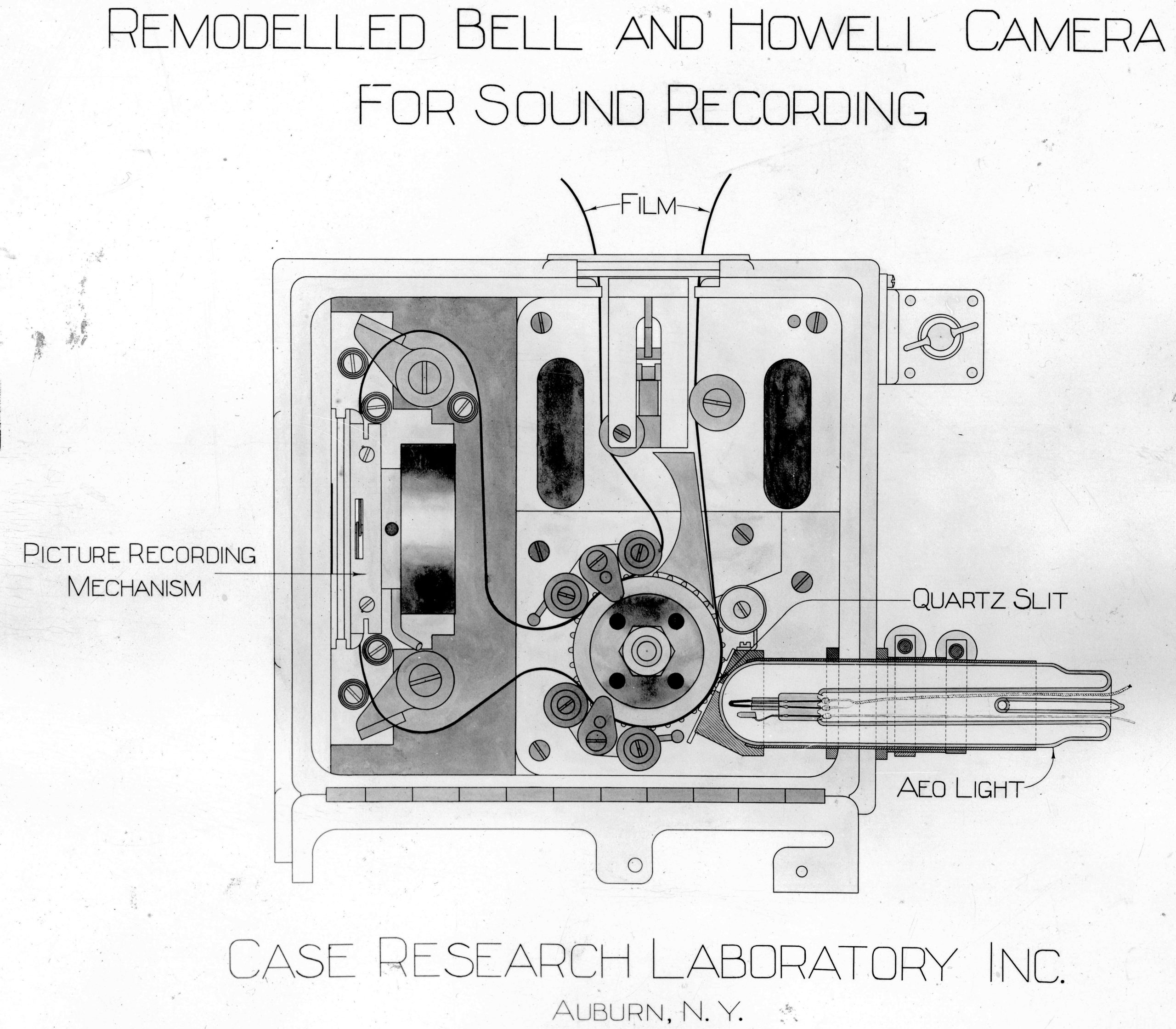 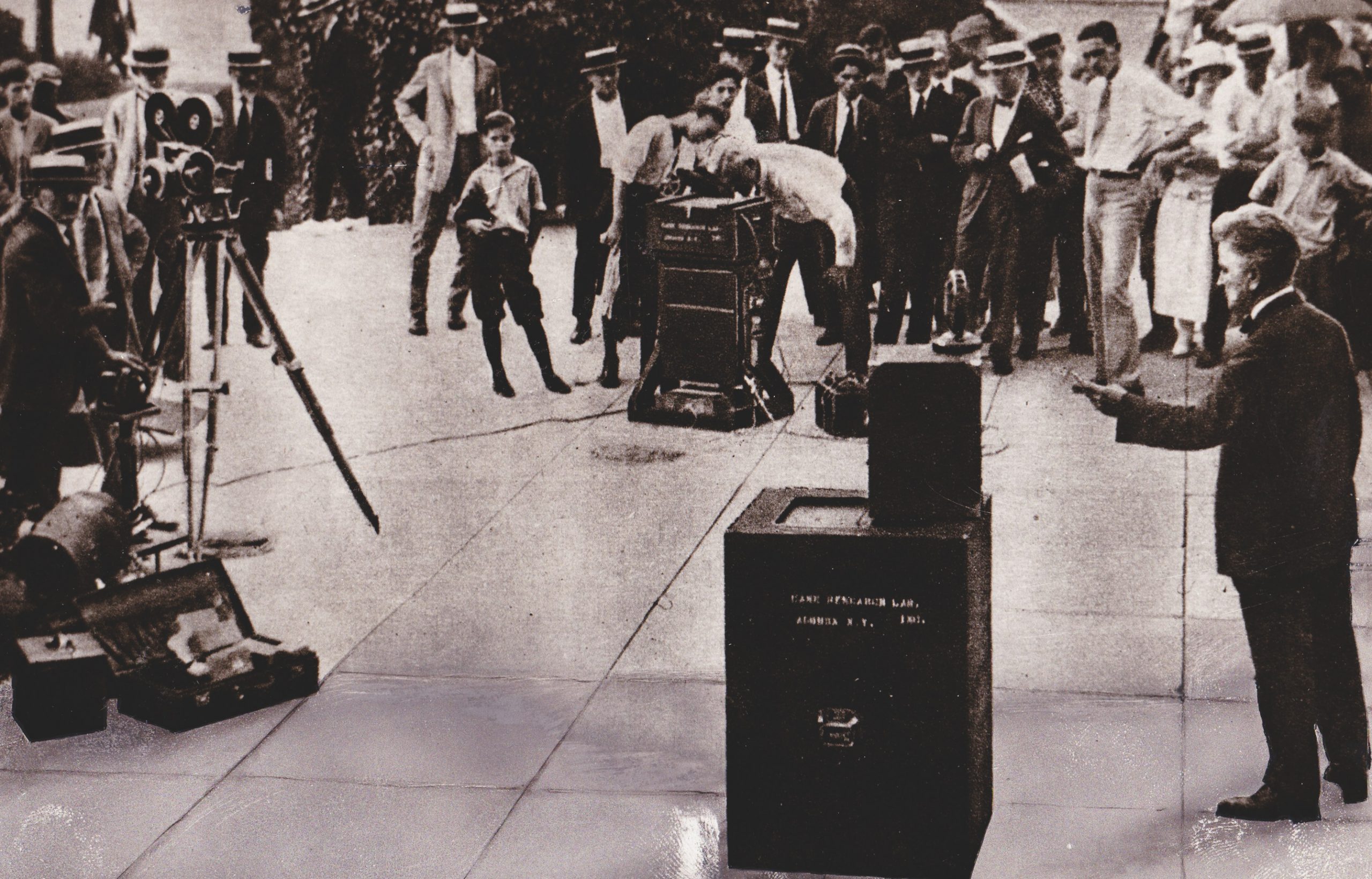 Case was particularly disappointed by Coolidge, remarking on the President’s irate nature as creating, “ the most frigid, hot day I had ever seen.” After a much more pleasant experience with LaFollette, Case decided he would not spend another day in Washington. This first sound film recording of a sitting President would become De Forest Phonofilm’s crowning achievement, and when the Case Research Lab received no acclaim from Phonofilm for their indispensable work, Case would finally sever ties with de Forest and set the Laboratory on a brief independent path from 1925-26. It was during this time, in 1926, that Case would have the opportunity to demonstrate his system to William Fox at his home. Fox was so impressed by the synchronized film and its quality that he agreed to finance the technology (despite legal pressure from de Forest) and Fox-Case Movietone would soon be born. 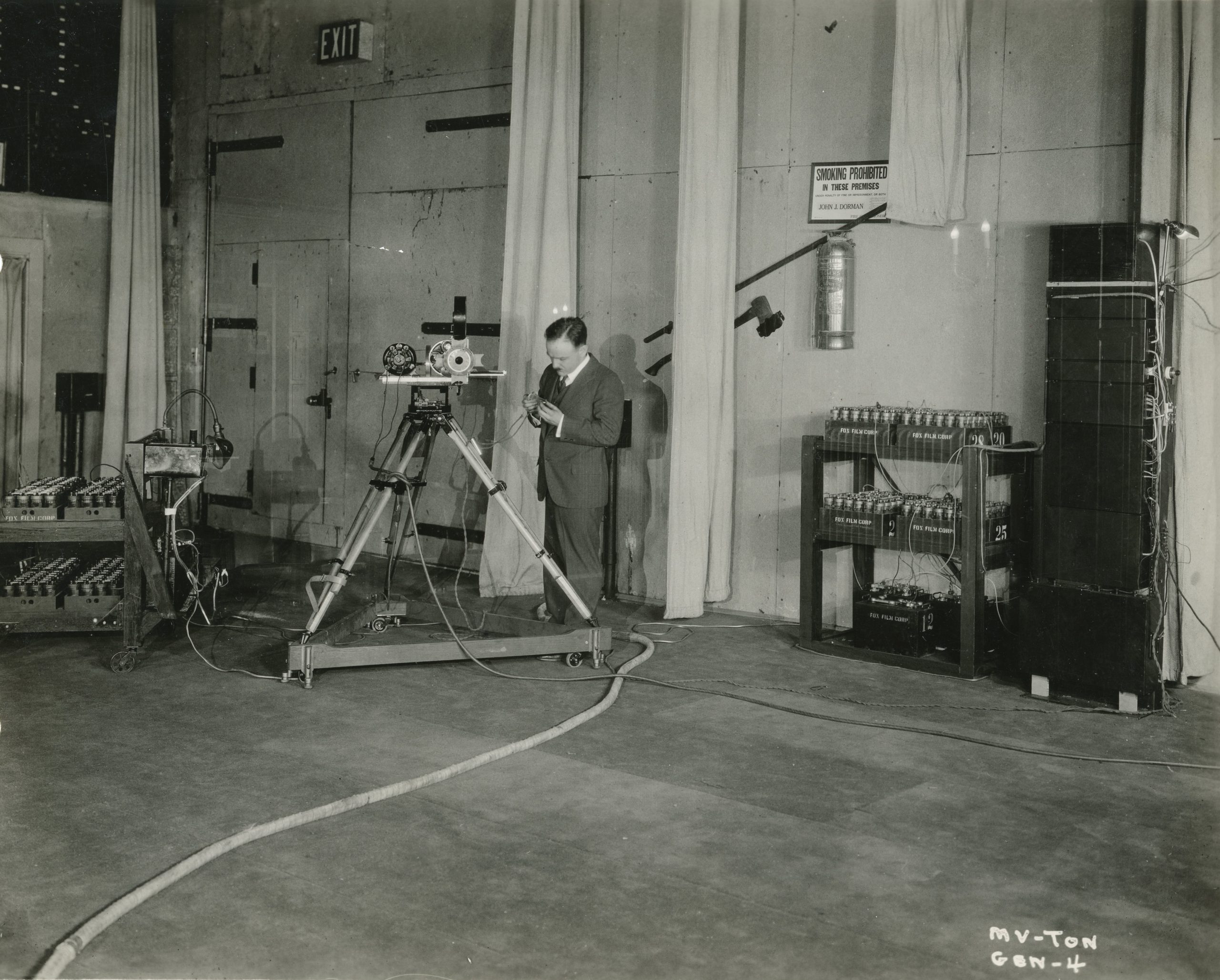 As the Case Lab moved more concertedly into a role as a major research center for Fox Film Corporation, Sponable would be instrumental in improving Fox’s facilities, at their studios in New York City designing the first purposely built sound studio. As Fox and the Case Lab continued to integrate, the “Movietone” trademark was established for Case’s system, and the new Fox-Case Movietone would soon become a household name with its association to the beloved Movietone News newsreels. These newsreels would create the first sensations in sound film in 1927 and would lead to the first synchronized sound film in the same year. This would mark the peak of the Case Lab’s technological contributions, as Case himself would lose interest in the creation of sound film in 1929 and the Lab would continue to create AEO lights for Fox for a few more years until the technology was surpassed. Although the Laboratory’s technological journey was barely more than a decade, the far reaching impacts changed the way we consume news and entertainment forever.

Thank you for reading! After this dive into the technology itself, in the next few months we will explore the process of testing films and share some of the earliest sound test films ever recorded!

Crediting for Images on this Page

Image: Case and Sponable in CRL with AEO light