Play On: A History of Music in Cayuga County

Auburn boasts impressive musical offerings today, from the Auburn Chamber Orchestra and concerts at the Auburn Public Theater, to live music at the many restaurants and wineries in our county, but Auburn has long had ties to music in various forms.

Founded in 1882 by Henry Wegman, who came from Switzerland and first worked at the Steinway Piano Company in New York City, the Wegman and Hanning Piano Company moved to Auburn from Ithaca in 1887.  First located on the corner of Clark and Green Streets, they later moved to the building that housed the Logan Silk Mill and Auburn Button Company on Logan Street. Here they were able to increase production to 1200 pianos a year.

Wegman Pianos enjoyed success due to Henry Wegman’s patented metal plate design for the tuning peg.  In other pianos, the tuning peg which the strings are wrapped around is set inside a wood plate. The wood plates expand and contract in response to temperature or humidity changes which shifts the peg and causes the strings to tighten or loosen. Wegman Pianos use a metal plate which is unaffected by such changes, allowing the Wegman Piano Company to claim that their pianos remained in tune much longer than other pianos.

The Wegman Piano Company was flourishing, with plans for an expansion in progress, when a fire broke out at the factory on May 1, 1914.  The fire destroyed the factory, and a large quantity of pianos were further damaged by water.  The company had been so successful that several other upstate communities invited the company to rebuild in their towns. Reluctant to leave Auburn, Henry Wegman announced “it is our purpose to reorganize just as soon as possible in this city, if possible.”  Auburn leaders found the Birdsall factory on Hulbert Street for the company, which it purchased soon after the fire. However, the damage proved too great to overcome and the company went bankrupt in 1915.

Stephen Horoschak emigrated from Austria to Auburn in 1900. Three years later he began working at the Wegman Piano Company and he later worked as a cabinet maker and carpenter. After he retired he returned to his childhood hobby of making violins, which he had been practicing since he was 11 years old.

This violin was the last of sixteen that he made and was constructed between 1950 and 1953. All the wood Horoschak used to make his violins was spruce from the Bavarian Mountains and was at least one hundred years old. The slow growing characteristics of the spruce produced a fine grain which made for a high quality tone.

Violins were not the only instruments this talented man made. In 1919, he completed this double action concert harp which took more than 1,000 hours of work. Concert harps are distinguished by the addition of foot pedals which allow semitones, or half-notes, to be played. The new range allowed by the pedals contributed to the rise in popularity of the harp in classical music during the nineteenth century.

Horoschak’s harp is made from eight different woods from three continents. The neck alone is made of seven layers of seasoned maple, laminated to withstand two thousand pounds of pull from the strings.

Horoschak made two concert harps and one single action harp in addition to the sixteen violins.

Along with these producers of musical instruments, Auburn had an abundance of musical performances.

The Cayuga Museum itself has a musical connection. In the early days of the museum’s history, the building was used by many clubs and organizations as a meeting and performance space. Music lessons were given in the building, and many groups used the space to hold recitals.

One such group was the Auburn Morning Musicales, started by Mrs. Alexander Brown in the early 1900s. The group sought to bring quality music to Auburn and foster a higher appreciation for it. Besides presenting their own musical recitals, the Morning Musicales brought in noted talent such as violinist Miss Frances Yontz who performed with the Dean of Syracuse University’s Fine Arts College Dr. Harold Butler, an accomplished baritone, and Ester Gustafson, an interpretive dancer who wowed crowds in a 1924 Morning Musicales performance.

In a letter to the editor of the Citizen in 1916, a writer signed “music lover” states; “It is an altogether admirable organization evincing that sincerity, painstakingness, and joy in art for art’s own sake, which spirit forms the root (and perhaps one might also say the branch) of all work that is worthwhile and which makes the work of even those who call themselves amateurs an acceptable delight.”

By 1921, concert audiences had outgrown the assembly room at the Chamber of Commerce so the group moved to the old Second Church on South Street, which could hold up to 700 people.

When the museum opened in 1936, the Morning Musicales were among the founding groups who used the building for rehearsals and smaller recitals.

The mission of Morning Musicales to foster an appreciation of music was certainly accomplished. By the early 1920s, Auburn boasted numbers of dramatic and musical groups comparable with larger cities and music has continued to play a large role in the fabric of the county.

Did you know Auburn even has its own song?

Truxton M. Hosley was a magician and artist who painted many scenes of Auburn, particularly homes and businesses that were later destroyed during the building of the Arterial.

”Life may take you from your homeland,
But your heart will still remain
In the haven of your home town
Fairest city on the plain.

Strolling through a distant garden,
Down that pretty mem’ry lane
You’ll recall Old Hardy Comers
Fairest city on the plain.

If you home has moved to Holland
Or a castle there in Spam
You’ll remember your fond first love,
Fairest city on the plain

When completed Hosley wrote a song for the flip side. “Sometimes the flip side becomes the hit side,” he said. Concentrating on an area spot that provided memories for generations, he chose the Enna Jettick Park on Owasco Lake Naming the song Waltzing on Owasco

Richard and John Contiguglia were born in Auburn in 1937 to Italian Immigrant parents. They were the second set of twins in a family of seven children and began playing piano together when they were five years old. Since then, they have become world-renowned duo pianists.

A defining moment in their young lives was in 1949. Noted pianist and composer Percy Grainger was in Auburn to perform at Emerson Auditorium and allowed the twelve year old brothers to perform three pieces in the middle of his concert. Afterwards, Grainger gifted the brothers with several of his musical scores and they have continued to play his music.

Throughout their careers, the Contiguglia Brothers have enjoyed discovering and performing unusual and forgotten works for duo pianists. A special love for Schubert has led them to play many of his pieces written for two pianists at one piano. With the Cleveland Orchestra they revived Victor Babin’s Concerto for Two Pianos and Orchestra, and at the Holland Liszt Festival they performed Liszt’s unpublished duo Grosses Konzertstück über Mendelssohns ‘Lieder ohne Worte’. Percy Grainger’s two-piano Fantasy on George Gershwin’s ‘Porgy and Bess’  is another of their favorites.

Aside from playing in concert halls around the world, the Contiguglia Brothers made it a point to perform in veteran hospitals, nursing homes, and mental hospitals whenever they could, through the organization Hospital Audiences. They were inspired to do so after playing an impromptu concert at a U.S. Naval Hospital in Guam during the Vietnam War years. After the concert, a young soldier told them, “Until today, I never realized the power of great music to make one forget the problems of the world.”

The Movietone Follies follows George Shelby, a young man from the south, who travels to New York City to convince his girlfriend Lila to give up on her dream of a stage career. The sneaky Shelby goes so far as to purchase the controlling interest in the revue so that he can fire Lila, but on opening night, Lila goes on in place of the temperamental lead and is a huge hit. The 1929 movie was popular enough to warrant a sequel the following year.

The music and lyrics were done by Con Conrad, composer and songwriter who won the first Academy Award for Best Song, Sydney D. Mitchell, lyricists and composer best known for his movie scores for Fox in the 1930s and 1940s, and Archie Gottler, composer, screenwriter, and actor who is known for directing the first of the 190 Three Stooges comedy shorts for Columbia Pictures. 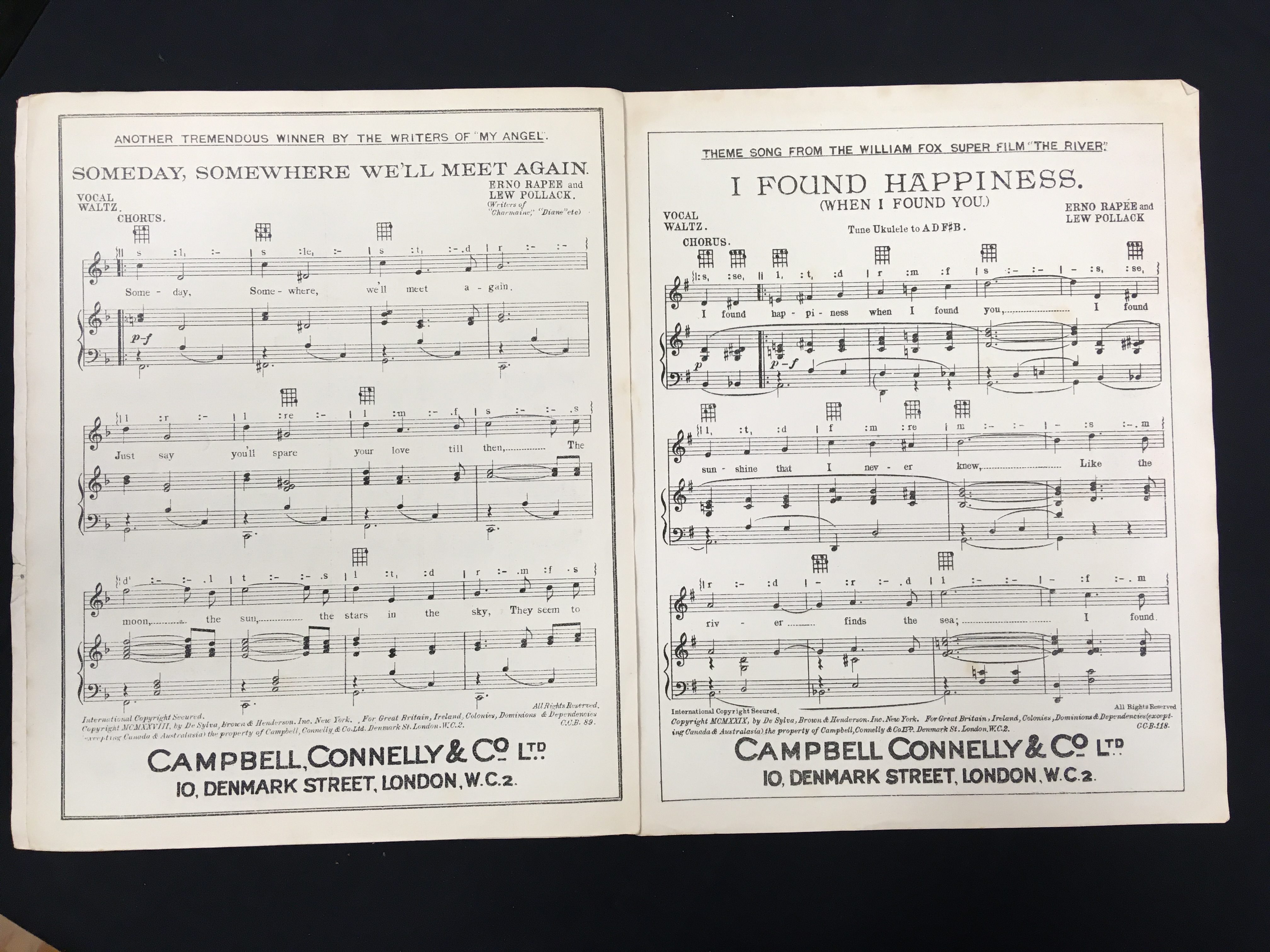